The robbery happened shortly before 6 a.m. Wednesday. The victim, who wasn't injured, also had their wallet taken
Apr 7, 2021 2:53 PM By: ThoroldToday Staff 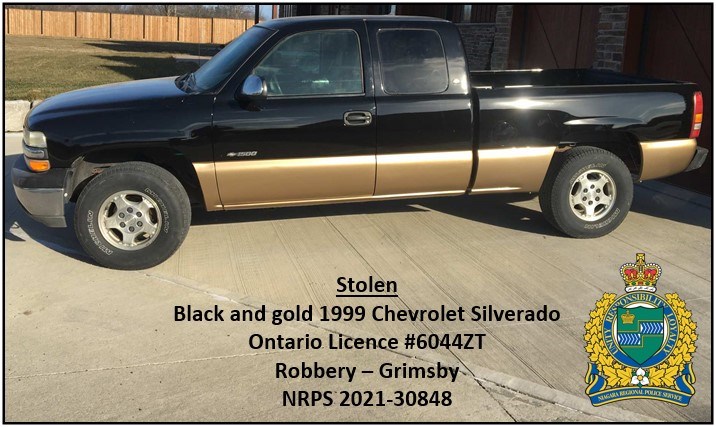 Police are currently investigating an armed robbery in which a truck was taken.Supplied photo
NEWS RELEASE
NIAGARA REGIONAL POLICE SERVICE
*************************
On April 7, 2021, at approximately 5:50 a.m., 8 District – Grimsby uniform officers responded to a report of a robbery in Grimsby.

Officers attended to a home in the area of Samuel Road and Bal Harbour Drive in Grimsby. The initial investigation by officers determined that a male victim had been warming his 1999 black and gold Chevrolet Silverado pickup truck (Ontario # 6044ZT) in his driveway.  A male suspect approached the victim and brandished a weapon. The suspect demanded the truck keys and the victim’s wallet. The suspect obtained both and drove from the area in the victim’s Silverado.

The suspect is described as:

The victim was not injured.

The location of the stolen truck is unknown. Should a member of the public see the truck they are being asked to contact the police.

The incident has been assigned to detectives from the 8 District detective office. Anyone with information about this incident is asked to contact detectives at 905-688-4111, extension 1009336