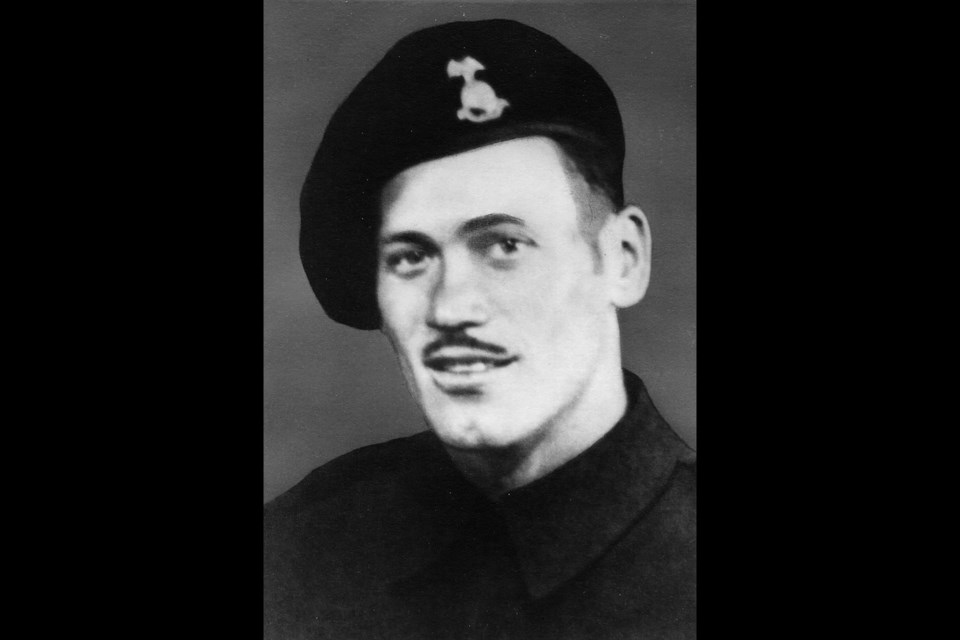 One of the funniest things my son ever said was delivered with perfect timing, right after my Dad’s funeral in 1998.

We were all weeping, filing out of St. Aloysius Church in Thorold South; slightly surprised at the “saintly” eulogy delivered by the priest. No doubt, Dad had a generous, big heart, and had attended Mass with my mom every week during the latter years of their marriage, which is probably all the priest really knew about him.

But the way he’d gone on and on, describing him as almost holy; well, it was a bit of a stretch. And my Dad would have been the first to agree.

There we were in the parking lot, weighted down with family grief, when Ryan said what we’d all been thinking: “Did Father Chris ever meet Papa?”

It was a classic case of Ryan comic relief.

Dad would’ve laughed his head off.

A mischievous sense of humour, along with a deep affection for kids and animals, were three of my favourite things about Alphonse Pelletier.

A former Regimental Sergeant Major, whose temper could flare at the drop of a hat, his joie de vivre more than made up for it; his temper—thankfully—mellowing as he grew older.

For years following his retirement, he played snooker and cards with his veteran pals at the Thorold Legion. Long-time Legion bartender Charlene Clocherty recently revealed to us that my Dad’s nickname there was “Teddy Bear,” because, according to her, he was “The nicest guy at the Legion.”

Once again exhibiting his trademark humour, Ryan’s reaction when I told him this—after laughing hysterically—was, “How tough were the other guys at the Legion?!”

Dad would’ve laughed even harder at that line.

He and his 10 siblings grew up in the colourful city of Chicago, in the era of another Alphonse—named Capone.

It must’ve been a huge adjustment when his parents moved the family to the hick town of Ste. Genevieve, Manitoba, where he met my mom as a pre-teen, in a rustic one-room schoolhouse. Incredibly, Mom’s sister, Addie, somehow managed to teach eight grades, including several of her younger siblings.

Mom told us many times how she was mesmerized by the redheaded “city slicker” from Chicago.

One of the few kids in school who had shoes—he made Mom instantly fall head over heels. Plus, he was the only kid—ever—to come to school in a suit.

Dad would’ve been 100 this year, and probably would've made it if his lungs hadn't been destroyed by decades of smoking.

For years, his death haunted me; a traumatic, sudden face-first fall from where he sat beside me on the bed to the hard hospital floor, when his weary old heart and lungs collapsed at last.

Now, happily, my mind drifts instead to that infamous joie de vivre, best showcased when he “marched in the saints” at our frequent family get-togethers in Allanburg.

Hoisting the nearest chair upside down on his shoulder in order to play his trademark mock bagpipe, he led my dozens of cousins around our unfinished basement, all holding up their own chairs, shrieking with laughter.

Secretly peering at those amazing family antics from the stairway, the strange yet wonderful vision left indelible memories on my older siblings and me—triggering instant waterworks each time I hear When the Saints Go Marching In.

Dad, wherever you are, I hope you’re still marching in the saints, even though you will never be one.

Despite what Father Chris said.