The child is believed to be in the company of his father whose vehicle is described as a gold 2016 Mercedes SLK
Jun 28, 2020 6:53 PM By: ThoroldToday Staff 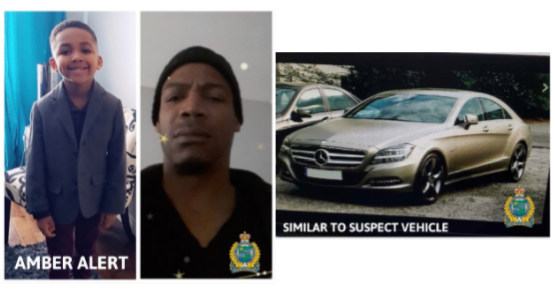 An Amber Alert has been issued for Dashun Mitchell, aged 6, who was last seen in Hamilton and is believed to be in the company of his father, John Mitchell.

Further investigation by officers with the 1 District (St. Catharines) Detective Office has resulted in charges in this investigation.

44-year-old John Mitchell of Hamilton is facing the following charges:

Mitchell is currently being held in custody pending a video bail hearing on Monday, June 29, 2020, at the Robert S.K. Welch Courthouse in the City of St. Catharines.

The Niagara Regional Police Service would like to thank the public and the media for their assistance in this investigation.

On June 28, 2020, at approximately 1:10 p.m., as a direct result of the Amber Alert issued at 12:30 p.m., the suspect male and child attended the 1 District (St. Catharines) office of the Niagara Regional Police Service located at 68 Church Street in St. Catharines in the gold Mercedes.

The suspect surrendered himself to officers there and was arrested without incident. The child is safe and uninjured.

The investigation remains ongoing by detectives of the 1 District Detective Office.  Anyone with information is asked to contact 905-688-4111, dial option 2, Badge #9470.

Further arrest and charge information in relation to this matter will be released as it becomes available.

The NRPS would like to thank the public and media for their assistance in this matter.

Further investigation by officers with the 1 District Detective Office led to concerns regarding the welfare of the 6-year-old child, leading to an Amber Alert.

Police are searching for the child and his father.  The boy is described as Dashaun Mitchell, a 6-year-old Black male, medium weight, light brown hair with brown eyes.  No clothing description is available.

Dashaun is believed to be with his father, John Mitchell, described as a 44 year old Black male, 5’7” with a large build and short cut hair.  No clothing description is available.

He is believed to be driving a 2016 Mercedes SLK Gold in colour, licence plate unknown. A photo of a similar vehicle is attached.

At this time, their location is unknown;  their last known location is the City of Hamilton.