One arrested as scuffle breaks out during protest over wage dispute 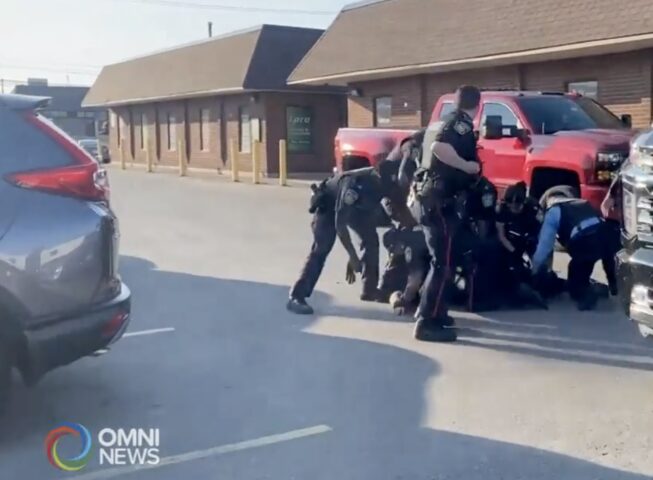 A group of international students and workers rallying behind employees they say are owed wages were met with violence during one of their demonstrations.

On Saturday, July 9, a group of more than a 100 members and supporters of the Naujawan Support Network (NSN) rallied outside of Sukh Auto Workers, in Brampton, Ontario, to demand over $4,000 in wages and vacation pay allegedly owed to Rupinder Sidhu, a former employee.

In a video circulating on social media, the owner, Sukhdeep Hunjan, is apparently seen trying to take away a demonstrator’s microphone and shoving and yelling at protesters.

Hunjan declined NCM’s multiple requests for an interview, though he insists Sidhu only worked part-time, three days a week, from January to April 2021.

Hunjan has a pending defamation lawsuit against Sidhu and NSN, claiming $515,000 in damages to his business by using “false statements and imputations,” according to the Statement of Claim filed with the Superior Court on June 17.

The July 9 action was organized by NSN on behalf of Sidhu, 32, a permanent resident who arrived from Punjab, India, in 2018.

The group alleges he is owed for work done during November and December 2020 and for accrued vacation pay after that.

At the rally, a scuffle can be seen breaking out between the group’s members and others in the crowd. Simran Dhunna, an NSN member, says one person who appeared “sympathetic” to Hunjan pulled the beard of a Sikh demonstrator and punched him, splitting his lip.

Peel police, who were called to the scene, confirm one person was taken into custody and “one person…received minor injuries.”

OmniPunjabi News caught the altercation and arrest on camera.

A protest over wage theft turned violent in Brampton over the weekend, with one person arrested by Peel Police. @JPS_Pandher reports. @NSNPeel #wagetheft pic.twitter.com/yrjoUTomJT

Following the demonstration, Dhunna says more workers from Sukh Auto Workers have come forward with similar experiences and NSN is currently in the process of reviewing their evidence.

This past June, with the help of NSN, Sidhu submitted an official complaint against Hunjan to the Ministry of Labour, Training and Skills Development, and shared it with New Canadian Media. In response to a query, the Ministry confirmed that it has received the complaint “and is currently assigned to an Employment Standards Officer (ESO) for investigation.”

Sidhu holds he was only paid a lump sum of $600 for November and December 2020, with Hunjan claiming it was because he was in training.

The complaint goes on to say that Sidhu began receiving the promised minimum wage beginning in January 2021, but still did not receive vacation pay.

“A few days later, Mr. Hunjan told me he had work for me again and told me he would pay all of my outstanding pay and increase my wage rate to $15.00 per hour if I returned to work,” he says in the complaint.

Sidhu returned on March 16 to the promised wage but still did not receive vacation pay, with Hunjan claiming he didn’t have to pay him vacation pay as a part-time worker.

“He said he would only pay me vacation pay if I agreed to become a bonded worker for one year. I refused and provided Mr. Hunjan 15 days’ notice that I was quitting,” Sidhu says.

After that, Sidhu says Hunjan blocked his calls until January 2022.

When he finally made contact in January, Sidhu told NCM (with the help of Dhunna translating) that Hunjan agreed to meet him on-site to pay him.

Sidhu arrived and couldn’t find Hunjan, so he called him. Sidhu says Hunjan answered his cellphone and accused him of trying to steal from him and threatened to have him deported.

Sidhu says Hunjan then entered the shop, grabbed a shovel and struck Sidhu on the shoulder before threatening to call the police and have him charged with theft. He then physically removed him from the shop.

Sidhu says police arrived and told him to leave the property.

Later that day, Sidhu contacted NSN for the first time.

After reviewing his documents – including cheques and paystubs, bank account deposits, Sidhu’s own worklog, and text/WhatsAPP exchanges with Hunjan – and calculating his unpaid wages, NSN wrote a letter on April 20 of this year to Hunjan demanding that he pay Sidhu.

On May 28 of this year, NSN began the public campaign against Hunjan in front of his shop near the corner of Steeles and Rutherford.

Following that demonstration, says Dhunna, Hunjan took the signs of his shop down to try to “escape criticism from the public.”

The July 9 demonstration was also aimed at Mahabir Singh Batth and Amandee Kaur Batth, the (former) owners of Baba Dabha for alleged owed wages to three former employees totalling over $10,000.

After leaving Hunjan’s auto shop, the group headed to the Batth’s private home, where they demonstrated outside of it.

Mahabir did not reply to NCM’s request for an interview sent July 12.

According to the Ontario Human Rights Commission, while people cannot be discriminated against based on their citizenship status, Canadian citizenship may be “a legal requirement to get a job.”

However, the Ontario Human Rights Code does protect every employees’ rights despite “race, ancestry, place of origin, colour, ethnic origin, citizenship,” among others.

Nevertheless, says Dhunna, threats of deportation, as well as verbal and physical abuse, “happen more acutely for people with precarious immigration status.” That can include those who rely on their employees for their permanent residence applications, which was the case with some of the workers at Baba Dhaba.

As NCM has previously reported, demonstrators at similar protests say wage theft is “rampant” in the trucking industry, in logistics companies, on construction sites and restaurants, where newcomers with precarious immigration status are commonly found.

The post One arrested as scuffle breaks out during protest over wage dispute appeared first on New Canadian Media.