Canucks' Hughes: 'Crazy' that Alexis Lafreniere could go to a contender

Quinn Hughes is well-versed in the NHL's draft lottery. And like many observers, the most recent iteration threw the Vancouver Canucks defenceman for a loop.
Jun 30, 2020 7:46 PM By: Canadian Press 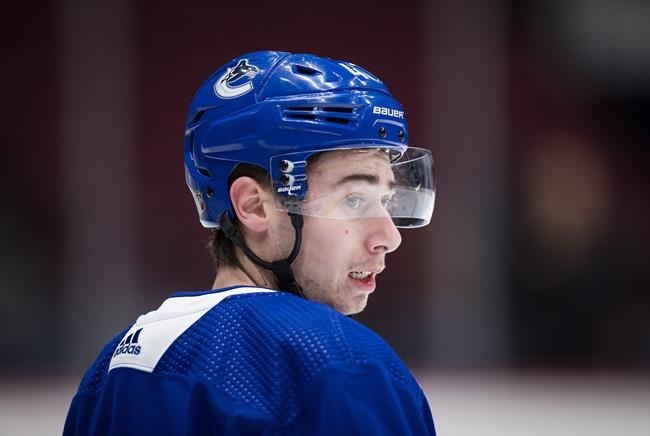 Quinn Hughes is well-versed in the NHL's draft lottery.

And like many observers, the most recent iteration threw the Vancouver Canucks defenceman for a loop.

A mystery club — a placeholder referred to as Team E — beat the odds in Friday's draw with a 2.5 per cent chance to secure the top pick and the right to select star winger Alexis Lafreniere at the pandemic-delayed 2020 draft.

That means eight franchises, potentially some with Stanley Cup aspirations, will take part in a subsequent lottery following this summer's qualifying round, should the NHL be able to conclude its season under a 24-team format after it was shuttered by COVID-19 in mid-March.

So if things don't go well from Sidney Crosby's Pittsburgh Penguins, Connor McDavid's Edmonton Oilers, the offensively-stacked Toronto Maple Leafs or even Hughes and the Canucks, each will have a 12.5 per cent chance of landing a pretty nice consolation prize for missing the playoffs.

"Some of these teams that are in the (qualifying) round, they're pretty much all high-end teams," Hughes said on a video conference call Tuesday. "And they're going to get the best player in the draft.

The New Jersey Devils, with the third-best odds, moved up to No. 1 and proceeded to take Jack Hughes with the top pick 2 1/2 months later at the draft in Vancouver.

Quinn Hughes, who's one of the favourites to win the Calder Trophy as NHL rookie of the year after a standout season, no doubt also kept an eye on the 2018 lottery when the Canucks wound up with the seventh selection, which they eventually used to snag the smooth-skating blue-liner.

Friday's lottery saw the Los Angeles Kings grab the second pick, the Ottawa Senators secure the third and fifth slots, and the last-place Detroit Red Wings drop from No. 1 to No. 4.

Things at the very top, however, remain unsettled.

"We had a lot of fun watching," said Hughes, who's taking part in two weeks of cohort quarantine in Vancouver after arriving from the United States. '

"It's definitely very exciting. I remember Jack being in that situation last year and watching that and being real nervous for him. We all wanted to see where maybe Lafreniere would end up.

"Obviously didn't get to see that."