Indigenous leaders in Saskatchewan are calling on Catholics to stand in solidarity with residential school survivors by not attending church services.
Jun 12, 2021 1:22 AM By: Canadian Press 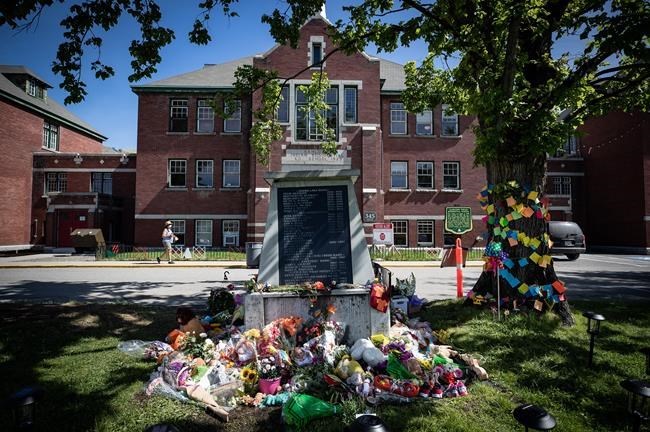 Indigenous leaders in Saskatchewan are calling on Catholics to stand in solidarity with residential school survivors by not attending church services.

Felix Thomas, chief of the Kinistin Saulteaux Nation northeast of Saskatoon, asked Friday for Catholic worshippers to make their feelings known by praying at home instead.

"Something that everybody and every Christian can do is have that show of solidarity and not show up for church on Sunday," said Thomas.

"If it’s not this Sunday, pick a Sunday."

It would send a message to the church that congregants care about what happened in residential schools and want a meaningful apology, he said.

"You can pray at home in your own way. You don’t need a middleman to pray to the Creator, to God."

David Pratt is vice-chief of the Federation of Sovereign Indigenous Nations, which represents 74 First Nations in Saskatchewan. He said "anything that would help pressure the (Catholic) Church to do what's right would be good."

He said Pope Francis needs to apologize for the church's role in residential schools.

Last Sunday, the Pope expressed his sorrow following the discovery of the remains of what are believed to be 215 Indigenous children found buried at the former Kamloops Indian Residential School site in British Columbia.

He stopped short of a full apology for the Catholic Church's involvement in Canada's residential schools.

"We don’t think he’s gone far enough," Pratt said. "They (the Catholic Church) have to apologize. I know some people say it’s not important, but we believe it’s really important. There has to be an acknowledgment of the wrongs done by the Catholic Church.

"There is no excuse for them not accepting their role."

Pratt said the discovery in Kamloops has "reopened the hurts and the pains and the trauma" of residential school survivors, and the Pope's non-apology is prolonging that pain.

"Many of our people are practising Catholics as well," said Pratt. "They need (an apology) for their own healing, because of some of the things they suffered and endured. They need to hear the leader of their church recognizing the harms that they’ve done to them.

"We call on all members of the Catholic Church to talk to their bishops, talk to their archdeacons, talk to their pastors and their ministers (and) put as much pressure as they can on the Pope to do what’s right and to apologize."

The Canadian Conference of Catholic Bishops did not respond to a request for comment.

Pratt, who expects more bodies will be found at residential school sites, said continuing to wait for an apology from the Catholic Church is a moral issue.

"As far as I’m concerned, if you cannot recognize the harms and impacts that you and your organization have done to individuals, you’ve lost the moral leadership to be able to address and speak on behalf of your congregants."

Thomas said staying home from church is something people can do "to support the 215 that were found in Kamloops."

This report by The Canadian Press was first published June 11, 2021.