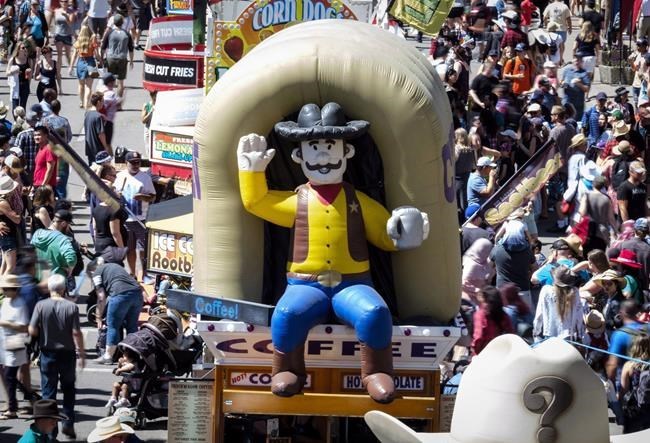 EDMONTON — Alberta's COVID-19 vaccine lottery offering million-dollar cash awards and trips to Cancun is adding the Calgary Stampede to its stable of prizes.

More than 70 per cent of Albertans have received at least one vaccine dose, but Premier Jason Kenney says the government is still hoping to entice more.

"We've still got a ways to go yet," Kenney said in a social media video posted Monday.

"We figure there's about 15 per cent of Albertans who are open to getting vaccinated. You just haven't gotten around to it yet."

Kenney said there will be 635 giveaways for the Stampede, which features a world-class rodeo, midway rides and country music shows.

The prizes include admission passes and tickets to shows and the rodeo.

The winners must be over 18 and have received at least one COVID-19 shot. They are to be chosen on July 1, along with the winner of the first of three $1-million prizes to be awarded to vaccine recipients over the summer.

Alberta Health said about 1.5 million people have signed up for the first draw.

The other two million-dollar prizes will come later in the summer, along with draws for free trips from airlines and resort packages in Mexico.

Alberta is lifting its remaining pandemic health restrictions on Canada Day, given that more than 70 per cent of eligible recipients have been vaccinated at least once.

About 29 per cent have received two doses and are fully immunized.

Kenney said more people need to get a vaccine to keep the province from backsliding into another COVID-19 crisis in the months ahead.

He has frequently held up the Stampede, which begins July 9 in a scaled-down fashion, as the symbolic starter's pistol for Alberta returning to pre-pandemic normality.

COVID-19 forced organizers to cancel last year's event. This year's 10-day festival will have scaled-down capacity, no chuckwagon races and other health measures, including rapid testing and proof of at least one vaccine dose for rodeo competitors.

The federal government has granted the Stampede a quarantine exemption for rodeo competitors and some support staff who cross the U.S.-Canada border.

However, they still must monitor for COVID-19 and maintain other safety and distancing rules.

The festival's main party tent, Nashville North, will use digital queues and better airflow to reduce the risk of transmission.

Given the U.S. border remains closed to non-essential travel, most of the visitors to the Stampede this year are expected to be from Alberta.

It will be the first major public event in Canada since COVID-19 took hold more than a year ago.

Alberta is the first Canadian jurisdiction to end major health restriction The move has been questioned by some medical experts and doctors given the rise of the more contagious Delta variant.

Kenney has said the province is monitoring the variant, first identified in India, but had added that COVID-19 case numbers are low and mass vaccination greatly reduces the chances of severe outcomes or hospitalization.

Alberta has distributed 3.8 million vaccine doses. Anyone who has received a first shot can now book a second one.

Also Monday, Alberta Health announced it expects to get 266,000 fewer doses of the Pfizer-BioNTech vaccine than expected, but that the decrease is more than offset by an increase of 434,000 Moderna doses from last week’s shipment.

"Both Pfizer and Moderna are mRNA vaccines. They're not identical, but extremely similar. It's perfectly OK to get one dose of each. In fact, there's some evidence that suggests this may actually boost your immune response," Hinshaw said in a statement.

As of Monday, there were 2,003 active cases and 214 people in hospital with the illness, 56 of them in intensive care.

This report by The Canadian Press was first published June 21, 2021.