Thorold residents Karen Head and Angela Braun appeared at council Tuesday night, asking for the city’s support in hosting a fundraising hockey game to help bring an endangered family to safety
Feb 20, 2019 11:07 AM By: Cathy Pelletier 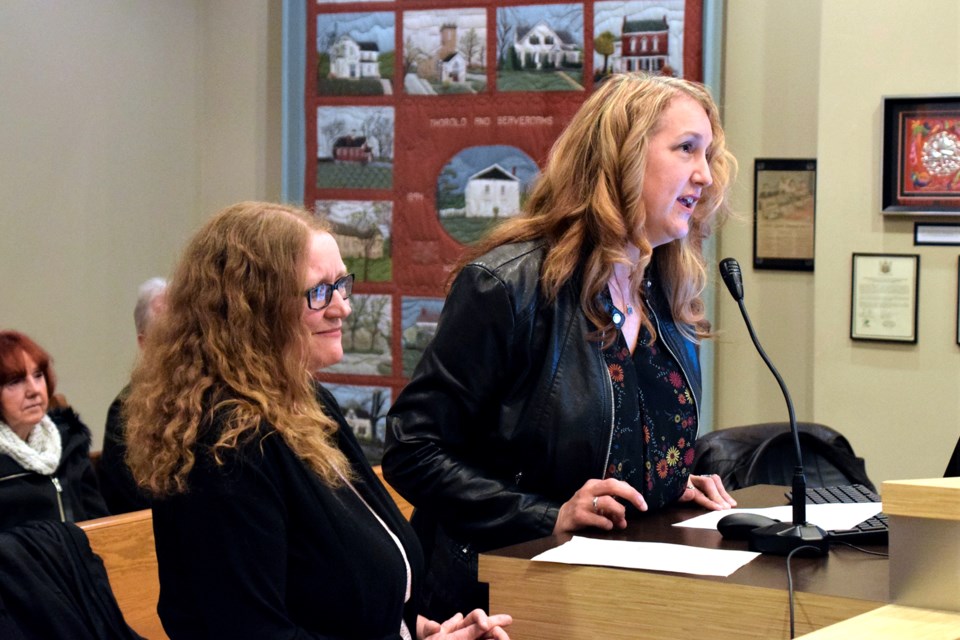 Karen Head (r) and Angela Braun appeared at council last night to ask for support in a humanitarian cause. Tony Vandermaas/ Thorold News

A family that’s fled from being beaten, persecuted and forced to change their faith is seeking refuge in Thorold.

Currently, the grandmother, two daughters, and young grandson named Moses—live in exile, holed up inside a one-bedroom apartment in Thailand, after fleeing their native Pakistan, where they were victims of extreme violence.

Head, a health care professional, said the family was introduced to her “via a good friend. One daughter was very badly beaten, with numerous visible bruises and swelling to her face and body,” she told council. “Her sister was burned in the street as an example.” Moses can’t go to school and “They cannot leave for fear of being deported.”

Head and Braun hope their hockey game will raise the $35,000 required by the Canadian government for sponsorship. Once funds and the necessary completed forms are received, “They will bring the family to refuge here in Canada. We are working here to save them from harm’s way and harsh circumstances and probable death,” explained Head.

“We have had a lot of support,” she added, “but cannot do this alone. We are bringing a fun, amazing event.”

According to Braun, “We need to support this venture, because Thorold is a city with heart.”

She recounted funds spent on demonstrating the city’s value placed on seniors by supplying them with a renovated seniors centre and installing sidewalks along Allanburg Road for Ontario School students' safety in Thorold South as past examples.

“The money we had to spend was secondary to human life. We believe in the right to live free of discrimination and violence, especially due to one’s belief. What could be more Canadian than a hockey game to help a family in desperate need?”

The game will be held at the Thorold Arena on March 28, featuring the Mounts playing against Thorold Minor Hockey coaches and alumni, and hopefully a few former Junior B stars, stated Braun.

Tyke teams will play between periods and local students will sing O' Canada, she added.

“Not only will they enjoy a great hockey game but they will support freedom.”

There will be raffles and a barbecue to bolster the fundraising effort.

Expressing his concern about ice rental fees, and fear of setting a precedent for future similar events, Coun. Anthony Longo asked the difference between the normal rental fee and the discounted TAAA rate, which was reported as $680 and $445, respectively.

Coun. John Kenny—who’s also a long-time member of the Mounts—said the team would cover the rental cost.

“Our team has been involved with charities before and I think it’s a good cause and we should all support it,” he told councillors. “The community should be doing these kinds of things more often.”

Coun. Victoria Wilson agreed, despite the fact that it could pave the way for future requests.

“I cannot imagine not supporting this family.”

“If not for this charity game, we would’ve been losing money since the ice would have been empty anyway that night,” said Coun. Jim Handley.

“I just have to look out for the city,” said Longo. “That’s my job. I will come to the event and spend money and support it,” but he said he wouldn’t vote for it—adding that he was glad to see his fellow councillors all speak in favour of it.

“I cannot think of a better cause,” said Coun. Ken Sentance. “I am willing to take the chance for what may come along later on.”

Mayor Terry Ugulini said he understood “about not setting a precedent, but I don’t think it will. They are going to bring kids in to use the ice and we are utilizing minor hockey coaches and the Oldtimers, who do a lot of good in the community.”

About the Author: Cathy Pelletier

Cathy Pelletier is an award-winning newspaper journalist/editor who writes for ThoroldNews.com
Read more