REMEMBER THIS? The First Nations Peace Monument at Decew Park is a place for reconcilliation 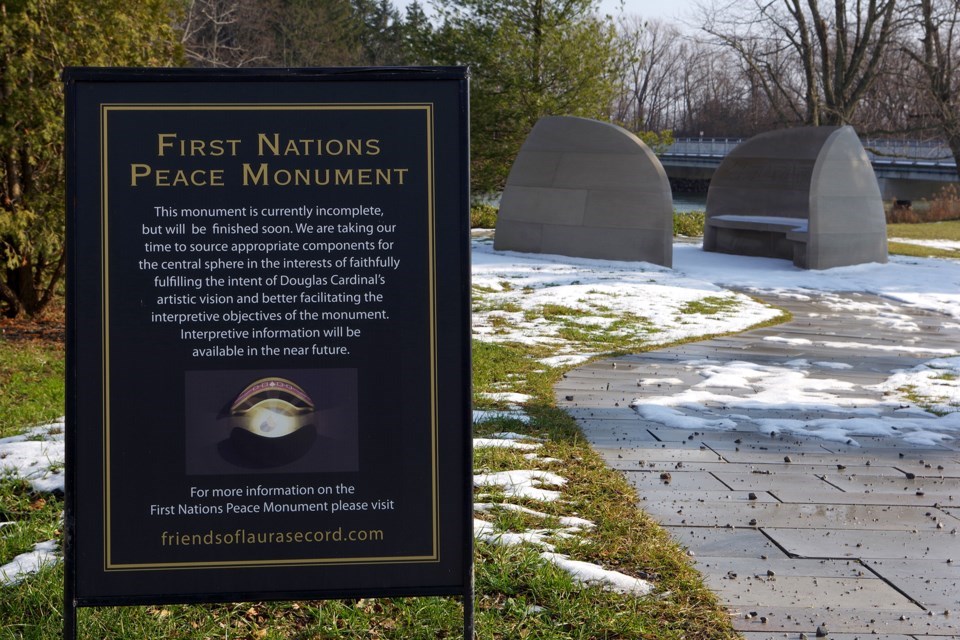 Thorold News is excited to announce a new historical segment with the headline: 'REMEMBER THIS?', highlighting local history from Thorold and the surrounding area through written submissions, as well as historical photos and facts. Do you have a story or a picture that will bring back memories of times past, or deepen our understanding of the times we live in? Email your submissions to ludvig@thoroldnews.com for a chance to be featured on the website.

For this first segment, we are pleased to bring local St Catharines history writer Gail Benjafield's article of the history behind the First Nations Peace Monument in Decew Park. The article was first published in The Architectural Conservancy of Ontario's 2020 Spring Journal. The author would like to acknowledge the work of late Thorold Historian Alun Hughes.

Douglas Cardinal is the most renowned Indigenous Architect in Canada, hands down. His works are lauded wherever one of his buildings or structures stand. Cardinal’s works, whether large Centennial projects or Prairie architecture share common elements. These include a cultural sensitivity and a sense of engaging with the earth. Whether it be the powerful Canadian Museum of History near Ottawa, Washington D.C’s National Museum of the Indian, or modest Indigenous schools or churches in North West Canada ---- all explore a wide spectrum of cultural and geographic references.(1)

This brings us to Niagara and to Cardinal’s recent project, the First Nations Peace Monument in Decew Park. The official opening ceremony of Cardinal’s monument was In 2017. It is a small curving monument which simply invites people to reflect on the history established here. Cardinal himself said at the ceremony that the ‘circle brings people together’ and honours both the earth and the matrilineal society of the Indigenous peoples. (2)

During the War of 1812, The Decew House in Thorold was where Laura Secord brought notice of the American troops incursion into Niagara. First Nations peoples played a large part in this moment in history. In the June of 1813 British troops, aided by Native Warriors were facing major battles with American troops. Historians still dispute whether the arrival in Decew Park of both Secord and native warriors was coincident.

There has been much mythologizing of the War of 1812 in the past 200 years. Older histories focus on Laura Secord’s famous walk to inform the British of encroaching American troops, a walk in which indigenous people apparently assisted her. We are not so sure. The late respected local historian Alun Hughes was a lead hand in deciphering the route Secord actually took. (3) Historians still dispute whether they arrived at that same spot within hours. Indeed Secord did arrive at the Decew House on June 22nd 1813, yet the indigenous warriors may have already alerted General Fitzgibbon to the approaching American troops. In order to understand the deeper meaning of this monument we must recognize that without the Indigenous warriors, our nation would not have won the Battle of Beaver Dams two days later and we’d simply not be the nation we are today.

The curving interior of the First Nations Peace Monument has two peace wampum belts inscribed to reflect the joint forces that galvanized the rout of the American forces and reflects the peace between the five nations of the Iroquois Confederacy and the Crown.

The First Nations Peace Monument is anything but majestic or flamboyant. Indeed ‘peace’ is the focal term here. There is a seating area within the curvilinear form and it is close by a stream flowing between Lakes Gibson and Moodie. Decew Park is just down the road from St. Catharines’ Morningstar Mill and leads into Thorold where the Battle of Beaver Dams occurred. Both tourists and locals check out the remaining Decew House foundations, sit quietly in Cardinal’s monument, wander over to the stream, and simply find some serenity and perhaps even healing here.

The Friends of Laura Secord, a volunteer group, hold annual fundraising walks along the Secord trails. Their president, Caroline McCormack is a direct descendant of Laura Secord. The Friends worked with Tim Johnson, a Mohawk and former executive director of the Smithsonian National Museum of the Indian, who convinced and engaged Douglas Cardinal to create this small but powerful monument.

October 2017 saw the opening of the First Nations Peace Monument, attended by dignitaries including Ontario’s Lt.-Governor Elizabeth Dowdeswell, Douglas Cardinal, and representatives from the local Indigenous community. This remarkable monument invites people to reflect on the history established here, certainly for all Canadians, but more importantly for the First Nations of our land.