The new operation aims to reduce waste from fruit farms by producing its spirits using ripened fruits that can’t be sold – with a strong focus on everything local
Jul 21, 2021 6:00 PM By: Evan Saunders 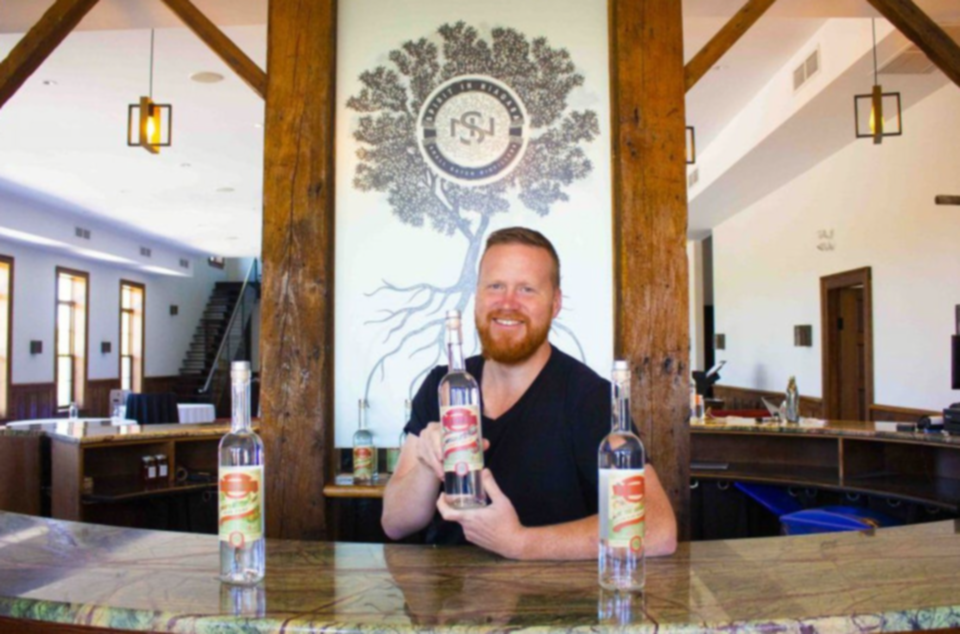 Master distiller Joshua Beach poses with Spirit in Niagara's Sun Ripened Yellow Plum spirit, made from plums that would have gone to waste on local farms.Evan Saunders

After four years of building and design, Spirit in Niagara is the newest addition to Niagara-on-the-Lake's bustling distillery industry.

The new operation aims to reduce waste from fruit farms by producing its spirits using ripened fruits that can’t be sold – with a strong focus on everything local.

Owner Arnie Lepp also operates A.J. Lepp Orchards in NOTL and ripened fruits will be sourced from Lepp’s many fruit farms across the municipality.

“Every year, every day we throw away a ton of fruit. Usually it’s the best fruit, the ripest fruit,” Lepp told The Lake Report.

Andrew Cieszkowski, director of sales and marketing, said, “Most people shop with their eyes. If it’s not beautiful, it stays at the farm,” and results in large quantities of perfectly good fruit becoming waste.

About 10 per cent of Niagara’s tender fruit produce goes to waste every year, roughly 3,050 tonnes of it, according to Spirit in Niagara.

That immense amount of food waste has been on Lepp’s mind for a long time. His family have been farming in Niagara for four generations and maintains about 200 acres of tender fruit farms.

“It’s bothered me my whole life, throwing all that good stuff away,” Lepp said.

“And that’s the motivation behind the whole project. It’s not the money, it’s not the whatever that gets attached to a distillery. It’s just the waste,” Lepp said.

“I can show you a picture of me as a boy sitting beside a mountain of wasted fruit.”

Lepp said leftover fruit is hard to recycle as it cannot be dumped anywhere on property due to the chemicals it releases when rotting.

“If you put it back in the orchard it will rot the fruits that get planted next year while they’re still in the tree,” he said.

And so, it seems Lepp has been on course his whole life to reduce fruit waste through a distillery.

“We’ve found the perfect place for it,” he said with a grin as he held a bottle of the distillery's Sun Ripened Yellow Plum spirit.

Tender fruits are so named because they can bruise easily. The seven varieties farmed by Lepp and used in the distillery are peaches, nectarines, yellow plums, blue plums, pears, apricots and cherries.

For wineries or distilleries that are producing a specific type of liquor, the harvest will come at one time of the year. For example, most grape harvesting begins in August and goes through September for wineries.

But since Spirit in Niagara will be working with seven varieties of tender fruit, all with different harvest times through the summer, master distiller and blender Joshua Beach will be processing fruit for a few weeks longer than your average winery.

“And we felt like ‘Why not?’ Right? You better be ready for it when it’s ready for you,” Beach said.

Beach has the job of brewing the fruit into wine and then distilling the wine into a stronger spirit.

He studied distilling at Heriot-Watt University in Edinburgh, Scotland. Before joining Lepp to open Spirit in Niagara, he oversaw the Wayne Gretzky Estates Distillery’s operations for over four years.

With Beach holding a master's degree in brewing and distilling from a world-renowned university, it seems Lepp has found the perfect person to oversee the myriad products the distillery will be producing as the year's harvest changes.

“Yellow plums are the first to come in throughout the year,” Cieszkowski said.

And with the seven fruits there are “several small windows to process the fruit into wine, but once it’s wine it will keep. Then we have a much larger window of time to distill the wine into spirits,” Cieszkowski said.

Currently, “we have three ‘eau de vies,’ which is technically just an unaged spirit, a white spirit. So right now, we have the Sun Ripened Yellow Plum, the Juicy Peach and the Yellow Pear,” Cieszkowski said.

“And I’m working in the back right now on a gin and a vodka,” Beach interrupted with a laugh.

The gin and vodka should be out next week, Kacey Lang, the director of digital marketing and assistant distiller told The Lake Report.

The distillery, located at 458 Lakeshore Rd., between McNab and Irvine roads, includes a large main building complete with a circular bar and a 140-person capacity chamber. The inside of the main building is striking.

“There was a 150-year-old fruit packing barn that we disassembled, and we repurposed and reclaimed all of the wood to build the building,” Cieszkowski explained.

It's a modern state-of-the-art facility, but the stone construction and 150-year-old beams give the feeling that the building has been there a long time.

“On a day-to-day basis, our thought is to transform this into kind of a cocktail lounge. Something casual. There’s really nothing on this side of town that is anything like this,” Cieszkowski said.

The distillery officially opened its patio for tastings almost two weeks ago. “We’ve been getting really great responses,” Lang said.

People have been watching the distillery's construction for four years and have been excited the doors are finally open, she said.

“Even some old German couple came in and commented about how they were stealing our peaches and making schnapps in their backyard for years. They’re happy that we’re going to do that for them now.”

The indoor cocktail lounge and patio will be open this weekend with a limited food and drink menu, Lang said.

Spirit in Niagara also is actively sourcing from local businesses and farms.

He said integrating the local community into the business ties back to Lepp’s mandate that the business be built around reducing and reusing waste.

“We’ve got a way complicated water filtration system because we want to be as good as we can as a corporate entity," Cieszkowski said.