Known as gentle giants for their demeanour and girth, the Highlanders stand out against a white snowy background with their lengthy horns and burly, brown coats
Feb 27, 2021 10:00 AM By: Jordan Snobelen 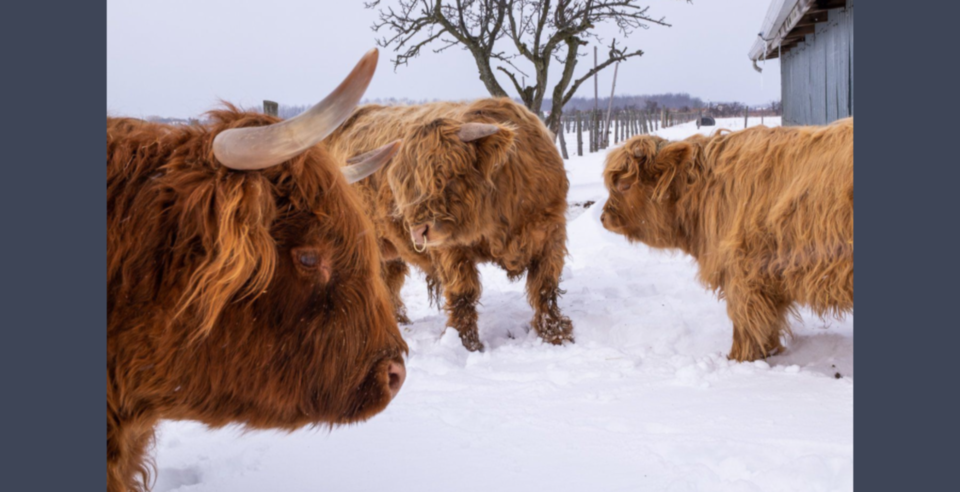 In Niagara-on-the-Lake, on 10 acres of land sandwiched between lucrative vineyards, McQuhae is breeding hardy, rustic bulls and cows hailing from the Scottish Highlands.

Known as gentle giants for their demeanour and girth, the Highlanders stand out against a white snowy background with their lengthy horns and burly, brown coats.

On a good year, McQuhae makes three trips south of the border: one in January to the National Western Stock Show in Colorado; another in the springtime to The Big E in Massachusetts; and finally to the New York State Fair, rounding out the year in August.

The shows are an opportunity to show off her bulls for coveted awards, to make business connections, and to look for heifers to diversify her shaggy clan’s genetic pool further north.

But with no shows left in the province for Highland cattle, and travel across the Canada-US border restricted to essential business, McQuhae has been limited in her options.

Like many modern farmers, McQuhae brings in off-farm income to pay the bills. Along with keeping an eye on her cattle, around 60 laying hens, and Wilbur the pig — a grumpy rescue that “runs the neighbourhood” — she’s also a cable technician and a server.

And like many other non-farmers, her work has been slowed with the coronavirus, leaving her heifers as her main income source.

Last year, McQuhae tried selling a couple yearlings but had no bites.

The cattle, however, kept munching away on thousands of dollars worth of hay.

Like a good omen, at the beginning of this year, McQuhae’s luck turned.

“It’s weird, things have sort of flipped in the last year,” she said.

She took to Facebook, posting ads for a bull and two freshly weaned calves this past January.

“Literally within 24 hours, all three were sold,” she said.

She’s now down to five heifers and three bulls, including her four year-old breeding bull, Epic Echo, the son of her late and beloved 17 year-old bull, Bucky, whose portrait appears on McQuhae’s many jam and preserve labels.

“He was an amazing bull; he and I had a bond from the beginning,” she said.

In 2016, two months after Bucky passed away, Sunset Gaelic Annan gave birth to Epic Echo, right on Bucky’s grave during a snowstorm.
Since 1998, when McQuhae purchased the land for her first two heifers, over 80 cows have come and gone from Gryphon Ridge Highlands. Some have been sold within Niagara, but most make their way out of the region.

McQuhae isn’t sure why there’s been an uptick in interest for the Highlanders — she’s heard of similar stories from breeders elsewhere and has a list of names wanting to buy from her — but says it could be because they’re easier to keep and less picky than other breeds.

As soon as they're ready, Honour the bull and Humbug the heifer will be up for sale next.

Though showing her breeds is expensive and time consuming, McQuhae is looking forward to her next trip south where she’ll get her name back out there, and maybe add a few more award ribbons to her collection.