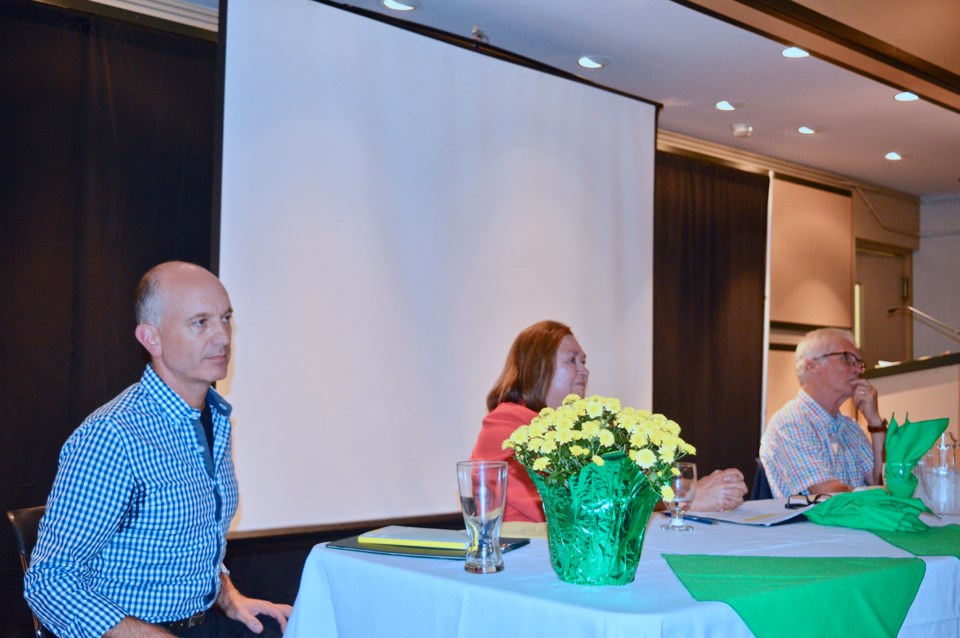 Green Party Candidates for Niagara listen to questions and comments from the audience with hopes of promoting awareness of its Green platform for the upcoming federal election. From left is Michael Tomaino, representing Niagara Centre; Sandra O’Connor, representing Niagara Falls; and Terry Teather, from Niagara West. Gloria Katch / Thorold News

The following article was submitted to ThoroldNews by Gloria Katch:

Mission Possible may sound like a super-human, super-hero based action movie, but it’s actually the title of the Green Party’s plan for the upcoming election.

Three candidates sounded off about the goals, values and platform of the Green Party for the upcoming federal election this fall. The trio, representing the ridings of Niagara Falls, Niagara West and Niagara Centre met with a few party faithful and many potential swing voters at Brock University, Thursday night.

Victoria Brzozowski, Niagara Falls Executive, Communications Coordinator of the event, said all of the ridings in Niagara have converged in attempts to work together toward “getting our first MP elected in the Niagara Region.”

The Green Party of Canada is a signatory to the Global Greens Charter, which commits members to social justice, participatory democracy, non-violence and sustainability in addition to ecological wisdom, states its press release.

The three candidates were given a few minutes to talk about their personal background and local issues before illustrating the Green Party’s 20-Step Climate Action Plan, and then fielded several questions on topical issues posed by moderator, Kailene Jackson, as well as audience members.

Michael Tomaino, the Green candidate for Niagara Centre, which includes Thorold, offers the slogan: “Not left, Not Right – Forward,” on his card, stating that he believes it’s possible to build “an equitable society, which includes achieving reconciliation and justice with First Nations peoples. He is a pharmacist, who has devoted his life to the health and welfare of others.

Tomaino said there will be subsidy programs available to assist people in the transition from the fossil fuel industry to green energy jobs. Retrofitting homes to maximize energy would create jobs as well as help solve the climate crisis, he said.

When discussing the housing crisis, O’Connor said safe and affordable housing is a basic human right. She said the Green Party supports funding through the Canadian Mortgage and Housing Act to make more affordable and non-profit housing available.

Terry Teather, a resident of Jordan and representative of Niagara West, said he wants to “decrease his carbon footprint and increase my political footprint. I want a party that supports green jobs and infrastructure.”

One of the reasons he's attracted to the Green Party is because of their fundamental understanding in working for their constituents, and not merely making decisions, according to the party’s leader.

“We want to change the climate in parliament,” he said. He later added that today’s issues require a different approach, and a “new way of doing politics,” as far as ethics and democracy are concerned.

One of the Green Party’s goals is to increase proportional representation in elections, so that “Ten per cent of the vote in parliament” will result in 10 seats in the House. Currently, he believes the government is too centralized, and many ministers have “less autonomy" to fulfill the obligations and needs required in their respective ridings.

The Green Party’s action plan includes declaring a climate emergency, so that the country will make changes in many areas to mitigate the issue that affects our air, water, food, health and quality of life. Teather said the environment shouldn’t be treated like a “political football.” This includes developing and meeting emission targets based on evidence and supported climate research.

Sandra O’Connor, Green candidate for Niagara Falls, a former Geography and Urban Studies student from Brock University, noted how some political leaders are ignoring “evidence-based” data. “Lots of people think the Green Party are big spenders and that can’t be farther from the truth. We believe in waste not, want not, and we challenge energy inefficiencies.”

As part of the Green Party’s energy plan, they want to charge a carbon fee to the companies that are creating the problem, and not at the pumps. O’Connor said subsidies to the fossil fuel industry would be eliminated, and that money could be allocated to the electrical grid, which needs to be modernized across the provinces, she added. The Green Party’s scheme includes rebuilding the grid by 2030. Fracking would be banned.

Going Green also means encouraging car manufacturers to build electrical vehicles and replace all internal combustion engines by 2040. While candidates touched on various aspects of their plan, Teather noted the government needs to manufacture more water bomber planes instead of military aircraft to eradicate forest fires, which spew large amounts of carbon dioxide into the air and create havoc in the atmosphere.

The Green Party also wants to implement a program that pairs young people with seniors to gain support by sharing rent, housekeeping and care, which will allow seniors to remain in their homes longer, pointed out Teather.

In attempts to fight poverty, especially through a transitional economy, the Green Party endorses the Guaranteed Livable Income plan and Teather told Thorold News he was “so disappointed,” when the pilot program in Ontario proposed by the previous Liberal government  was dismantled, before the public could see the results. Teather said he believes this would help decrease poverty, assist homeless people and persons with disability and mental health issues. Teather, who is a previous educator and worked as a social services administrator for the Region, said it would be so much easier for social workers to focus on the important health issues, if poverty were eradicated.

As far as preserving the agricultural industry, O’Connor emphasized the importance of offering support to sustain smaller farms and preserve prime agricultural land. In Niagara, O’Connor pointed out that strategies to ameliorate climate changes were needed to protect the ice wine industry. Furthermore, “We need to assist them (farmers) in cost-sharing programs to ensure water, soil, and animal preservation,” she said. Teather noted that irrigation for farmers in Niagara was to be protected, and The Ontario Fruit and Vegetable Growers Association is “on record” as supporting the Green Party. On a national level, Teather said: “We oppose large exports of our clean water, and we want the federal government to enforce regulations on this.”

When asked by the Thorold News if Tomaino supports the proposed amalgamation of Regional government, Tomaino replied: “No, I do not support that type of amalgamation.”

He said the funding needs to be allocated where people need it most—at the municipal level--and the structure of government needs to reflect that. “Eight out of 10 people live in urban areas. The Green Party wants the federal government to shift funding to people locally.”  From a “holistic perspective,” Tomaino noted municipalities must have more power to operate effectively.

When asked about the shortage of available housing locally, he said seniors, in particular, should be able to have affordable housing where their families are located and in their own communities and not be forced to move out of the area. To address the wait times at hospital and improve the care, he said the Green Party wants to devise a digital centralized waiting list that is more encompassing for health care.

When an audience member asked how to deal with the federal and provincial governments' differences in ideology, he said: “Slowly, with intent, but slowly. It’s just like climate change; you have to work with other countries.”

Teather stated earlier that the Green Party understands its membership needs to listen to other viewpoints and have an open dialogue in order to resolve issues.

While the Green Party’s 20-step program on a broad spectrum of issues may be deemed by many political analysts and pundits as ambitious, Teather believes the goals are “do-able.”

For more information on the Green Party of Canada, visit their website.

OPINION: Treating specific symptoms of autism or ADHD can help children, even without a diagnosis
Aug 1, 2021 8:55 PM

BEYOND LOCAL: The difference between sex and gender, and why both matter in health research
Aug 1, 2021 9:25 AM